We as a company strive towards excellence and make sure that our brand of service is delivered with honour and professionalism.

Connect with us on Linkedin 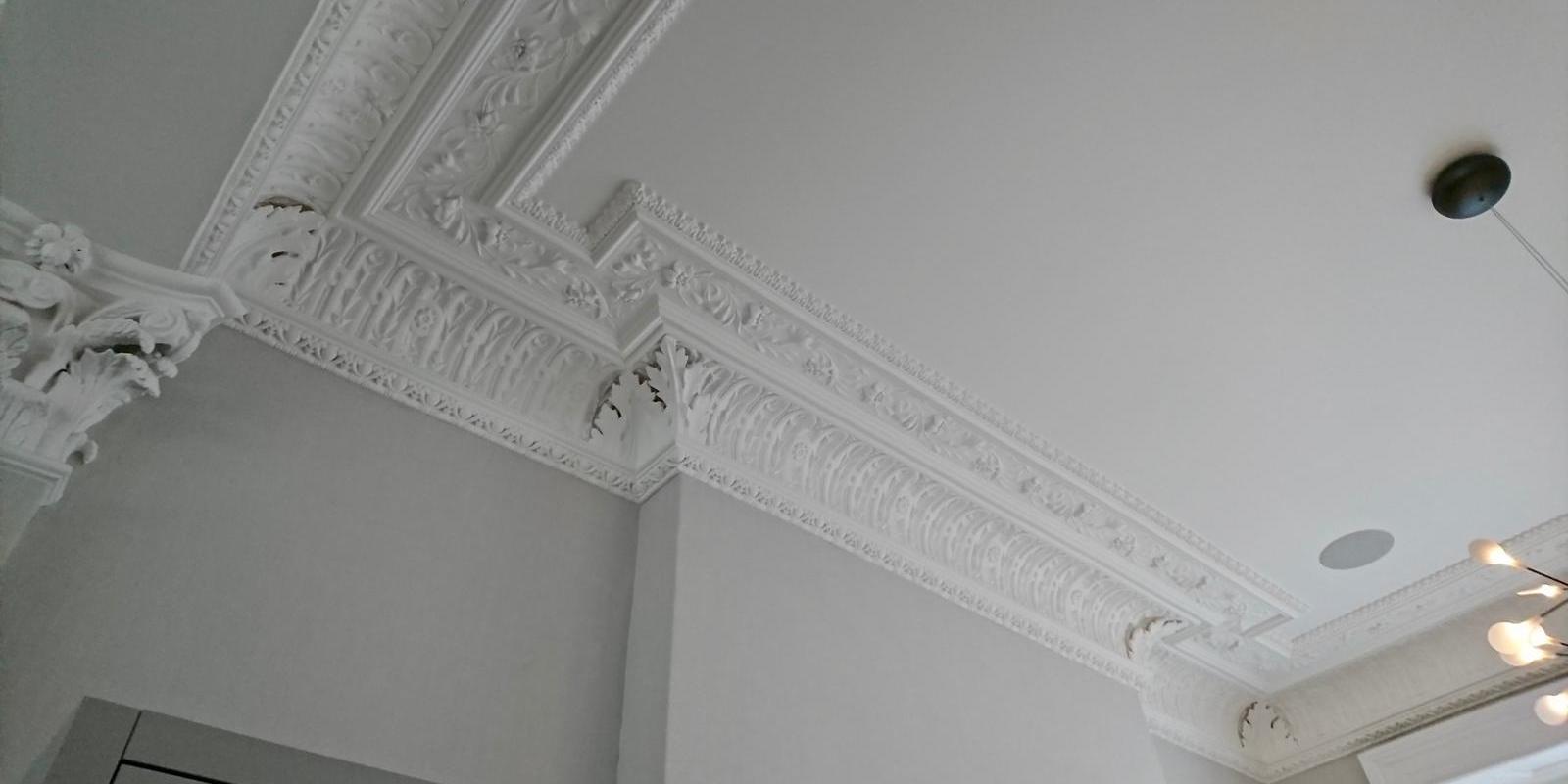 Posted on 16th April 2021 at 17:18
At Expert plasterers we offer a range of services which include ornate or decorative plaster work, along side our traditional plastering jobs for the residential home and the commercial market place.

Understanding the difference between Cornice and Coving

Our clients are often initially confused when they make enquires about using ornate or decorative plastering in their homes, and a common mistake is between cornice and coving feature.

Cornice: is the generic term and Coving is a style of Cornice which generally is more uniformed

The easiest way to describe where you would use a cornice is in a home with a taller ceiling, these are often in Victorian, Georgian and Edwardian properties where the sizes of the rooms are also much larger. Cornice features are often used to disguise the joint between the wall and the ceiling, they can be ornate and also plain and are typically made of plaster.

Some of the more traditional styles of cornice features have been removed over the years, but really do make a large room look more elegant even grand, clients who are trying to modernise a room may wish to remove the older more ornate cornice features but today they can also be contemporary.

All our Cornice and coving are made for us in a workshop in Pinner by a team of craftsmen and are supplied in lengths of 1-2 metres depending.
Visit Covingdons website

When would you use coving?

In our experience, Coving tends to be used in smaller rooms with lower ceiling heights, we would usually install coving in a room with a height of 2.4m – 2.6m, these are generally modern properties and are smaller but used for the same reason to create a clean seal between the wall and the ceiling.

We originally saw ceiling roses first introduced in around the 1620’s and only in the wealthiest of homes and the ceilings would have been very ornate.
By the 1810s - 1820s during the Regency period, they were being installed to try to protect the ceiling from the heat and soot generated by candle light and gas lights, but remained as decorative pieces at the centre of the room, often with lighting features hanging from them.
Ceiling roses are still being used in larger rooms with taller ceilings as either a central decorative piece or as part of a feature for a chandelier or a large down light, we often work with Interior designers to match the style of the room or the age of the property.

There seems to be less call for Corbels in current ornate and decorative plastering but we do still have the occasional client who may be renovating an existing room, or opening up two rooms to create a larger room and they need to keep the original style across the space.

First installed to protect the walls from furniture being moved around the room and damaging the walls, they now tend to be used as a design feature to create a two-tone aspect to a room. We often see clients adding these to the room and paint one layer and use wall paper on the other layer. We are seeing a comeback in the use of the Dado rail in 2021 as clients are refreshing and redecorating rooms in their home with their unused 2020 holiday fund.
To get some ideas, you can have a look on Pinterest as there are some wonderful designs and use of the dado rails there

We see limited use of arches as these tend to be in much larger rooms, with very high ceilings, often commercial clients in large older buildings in big reception areas.

Fibrous plaster was first seen in Paris and then in 1763 in London as a well to embellish a room, there are some excellent examples of moulds made and then installed in rooms in gentlemen’s clubs and coffee houses of the day. The ornate pieces are created in a workshop and then installed by using Fibrous plaster fixers. Here is a great publication from Historic England explaining the history.
Read article
If you have a specific piece of work requiring our attention, please contact us

There are generally 4 types of decorative plastering:
Structural Plaster – can be referred to as woodworm
Textured
Venetian
Mineral Plastering
Plasterers generally prepare a wall with a smooth surface for the decorating team to come in and then paint or wall paper, but with the use of decorative plastering you can really change the look of a room, dyes can be used to create new colours and depending on the choice of surfaces the textures can change the feel of a room.
If you want to find out more about the range of plastering services, we offer at Expert Plasterers, get in touch today to speak to one of the team
*****
"Aqeel and his team did an excellent job with plastering and painting my house. The quote I received was quick and very competitive and the work was completed to a very high standard. I would not hesitate in recommending and using them again for future work."
Simon Lockwood, London
*****
"Very professional from start to finish.
Quality workmanship and helpful service."
Dolan Cummings, London
Tagged as: Plastering
Share this post: